Here I am trying to draft interesting concepts, problems while working through Apache Spark with Massive dataset. The intention is to have a single point of source if any specific interesting problem encountered and not all the solutions are provided by me.
I will try to update the Q&A ...


In reduceByKey, data is already combined so each partition output at most one value for each key to send over network 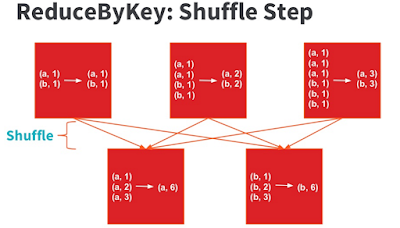 In groupByKey, all the data is sent over the notebook and collected on the reduce workers which makes it slow. 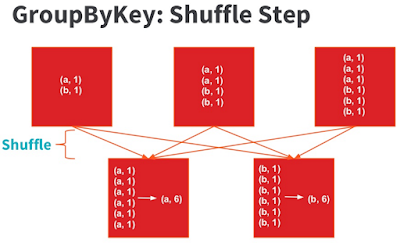 
Problem joining a large RDD to a Small RDD ?

- This will lead to limited parallelism because based on query , large RDD will be shuffled to limited keys

Broadcast the small RDD to all worker nodes. Then parallelism of large RDD will be maintained and no shuffle will be required.

Actions may transfer data from the Workers to the Drivers.

What does Spark collect do ?


collect() send all the partitions to the single driver , so collects on a large RDD can trigger a Out of Memory error

Don't call collect() on a large RDD.
Easiest option to choose actions that return a bounded output per partition, such as count() or take(n)


Similarly if you want to store a spark output as a single file, you can do that by saving collect() output as a file or use coalesce(1,true).saveAsTextFile


How to write a Large RDD to a Database ?


Initialize the database connection on the Worker rather than Driver .
Use foreachPartition to reuse the connection between elements

What is the way to iterate over Large RDD when memory is less ?


Consider a scenario when you need to iterate over 20 GB of data on a single node cluster or in your laptop, so you memory will be around 8GB but you want to read the data.

Performance implication of pySpark vs Scala in apache Spark.


For MLib, python code just converts everything to scala and then it further scala process, so MLib is only taking cost while converting py - scala.

in Spark 1.6, its very easy and straightforward


What is good about Broadcast in Spark?

Broadcast variables allow the programmer to keep a read-only variable cached on each machine rather than shipping a copy of it with tasks.

Ideally, if you have a huge array to be used by all the tasks in a process then this array will be shipped to each Spark node with closure.So if you have 10 nodes with 10 partitions each so in total your array will be distributed at least 100 times (10 * 10).

But broadcasting a variable will distribute the same array once per node using p2p protocol. So it gives huge performance benefit.


When will the Broadcast  slower than Shuffle?

Normal Join with Shuffle
Consider the scenario where there is no partition over the data. So normally 1/10th of data will already be in the correct executor.

So ideally, you need to shuffle 2160mb of data.


So usually we will broadcast the RDD_2, so now RDD_2 will be copied to each of the 10 Executors so in total 400 * 10 = 4GB of data needed to transfer. Now all the communication will happen via Driver so ideally you need to move quite an amount of data with the driver so cost associated.

Why and How to use HashPartitioner ?


Java arrays have hashCodes that are based on the arrays' identities rather than their contents, so attempting to partition an RDD[Array[_]] or RDD[(Array[_], _)] using a HashPartitioner will produce an unexpected or incorrect result.

S3 vs HDFS vs Cassandra


Why use Apache Kafka with Spark Streaming?

Generally, Apache Kafka is being used while using Streaming because to reduce the chance of data loss. There is a probability that receiver goes down but Kafka ensures no data loss.

If the setup is in hadoop cluster and process is happening over stream then we can avoid Apache Kafka.

Why completed jobs are not releasing memory in Spark Standalone mode ?